Let me tell you a story of two brothers. The older of the two formed a Corporation a few years ago, built it up, settled a C4 Wormhole system and created a large asset base from which to enjoy his little slice of the Eve Universe. However, a year or so ago duty called and the older brother had to leave for Marine training and left the corporation in the hands of his most trusted Eve friend and probably closest living relative, his brother. In his absence his brother and his right hand man proceeded to strip the absentee of his roles and all of his assets. Cheers bro? Now, I don't have a brother, but if I did I could see something like that happening. No doubt the perpetrator thought it was pretty damn funny, too. The victim, whilst a good sport about it all, made it quite clear to his younger sibling that his time would come.

Today was that day, and Holesale were the executors.

The older brother advised our leadership that his sibling rival had just deployed a Fortizar to house their many capital ships in the C4, a Fortizar he was confident was paid for with borrowed funds, no less. On hand for the anchoring timer would be a Thanatos, Chimera and the little brother's pride and joy Nidhoggur, and it was right in the middle of the dead zone for active members, that being the AU TZ. As such, the fleet we formed was less than ideal. Minimal logistics, very little tackle and everyone else in DPS. Our go-to doctrine of late has been the Sleipnir/Hurricane Fleet Issue Artillery one and it would serve us well once again, but with only a dozen or so of us, it would take a while to grind down even one Carrier, never mind three.

Landing on the Fortizar as it became vulnerable we were promptly engaged by the trio of carriers. Our swarm of drones was barely able to pause the Fortizar timer and for at least half an hour we played de-fanging games, killing off wave after wave of fighters. To be sure, the carriers had some early success, popping a few of the lighter tanked ships in fleet, but the tip of the spear remained impervious to the incoming assault and eventually we had the fighters all but subdued. Focus first turned to the younger brother and his prized Nidhoggur, one he was very boastful of because of its collection of kill marks. But without a support fleet there was little he could do to stem the tide of artillery and Carriers being largely buffer fit these days, he was facing an inevitable end. Once dispatched he was sent back to HiSec via the express route and the Thanatos, also shield tanked, was next on the menu. The Chimera followed soon after and the Fortizar was the big fat cherry on top of the cake. Twenty Billion ISK destroyed for less than 1 billion in losses. Not a bad day at the office and justice for a jilted older brother. 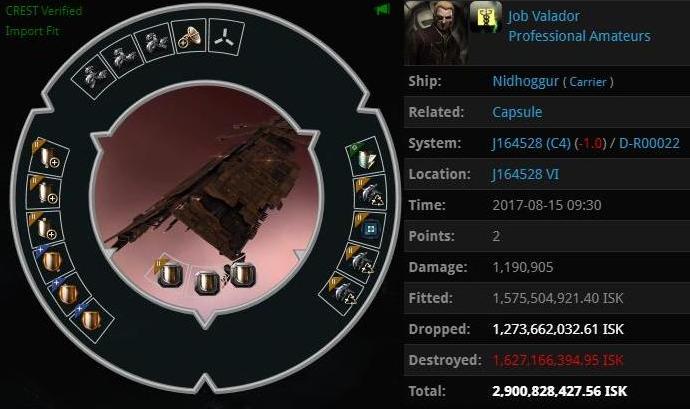